Snoring means that during sleeping a sawing, sustling-humming sound will produced. This sound is so strong that a partner, housemate, or even neighbours suffer from.

When breathing the air goes throught the nasal passage, pharynx and the trachea to the lungs. At the beginning of the trachea are the vocal cords (at the level of the Adam's apple). Snore caused by constriction airway in route between the entrance of the nose (nostrils) and the vocal cords. People who snore sometimes the nasal cavity is narrow,but usually it concerns a narrow behind the uvula (transition from the nose to pharynx) or area in the pharynx behind the tongue

Snoring can be very annoying by the partner, bot also the snorer him self can sleep badly. Severe snoring symtoms may be an indication of breath arrest during the night (apnea). This respiratory arrestoften leads to (almost) wake up, making sleep highly disturbed.

Snoring is more common by overweight people. A first step forwards a solution is therefore to try to lose weight. And men snore more then women. There are medical techniques to reduce snoring. At first , a doctor will try to keep the airway open during sleep, and so the vibration of soft tissue. Nowadays uses MRA (mandibular repositioning devices) at night the mandible forward position. If that is not enough, the doctor may try to strenght th soft tissue. This can be done during sleep, but also by surgery. 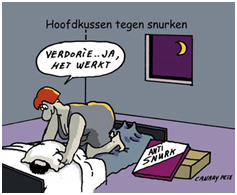 Behavior during the day can strongly influence the snoring. So it is possible alcohol and sedatives can make a silent sleeper a strong snorer. Also the sleep position can make a major difference: usaually one snores lying on the back. A simple to use method for backsleeping is attaching a tennis ball behind the pajamas. This helps, however, not always against snoring.